I thought about making handmade neck coolers because my old neck cooler I bought about five years ago was real old and I saw one of my friends put on a neck cooler which has a small pocket for an ice pack.

In Japan today, some shops give small ice packs to costumers who buy something like fresh cakes. The ice pack is about 7 by 8 centimeters in size. I have about ten ice packs in my refrigerator. I would be a fool not to take advantage of them.
I have no sewing machine, so I sew it by hand.
Now I’ll tell you how to make a handmade neck cooler from tenugui(手ぬぐい) which is about 33 by 90 centimeters in size. Its shape is a rectangle like the right image. (Fig.1)

Now I have five tenugui neck coolers. I wrapped it around my neck like this. Unfortunately, duration of effect is only about an hour. 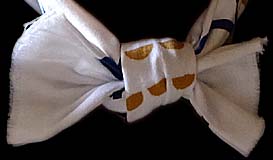