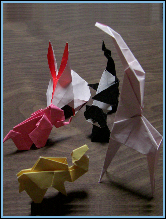 Since last autumn, I’ve made some kind of paper animals by a little necessity. Several years earlier, if I wanted to do so, I should have learned them from someone, looked for books, or thought how to make them by myself. But these convenient days, I can find a lot of kinds on the net.

Among them, I used these six. Can you tell me what they are? Great? Actually, the center of them is a cat. But most of my friends said it’s a dog. :-p

They are wonderful, aren’t they? They are not Japanese traditional origami but new ones which someone invented. We only sighed when looking the highest level origami, but these six are great in another way because even an ordinary elementary school child can make them.

The size of paper is the same as the rabbit and the elephant. So, the completion became a biiiiiiiiiig rabbit and a smaaaaaaaaaall elephant.

Edit : The reference sites are as follows.
rabbit：：penguin：：elephant：：cat：：camel：：giraffe

Wow they are so beautiful. I love that camel, and the elephant is pretty cool 🙂
Well, I don’t know if the others are a killer whale and a giraffe or not.
jaja, at first view, the cat seems a dog 😀
Cool job

Hi, gkatar,
> jaja, at first view, the cat seems a dog 😀
Ooops! I knew it. 8D
> the others are a killer whale and a giraffe
Yes, it’s a giraffe.
The last one is not a killer whale but a penguin. I accept its finish isn’t very good. ;D