last night, i felt hotter and thirstier than usual, probably because of the upper sleeping berth.

our breakfast started at 8:30a.m.. today’s couple looked older than yesterday’s. i guess 80% of the passengers were elderly couples.
as the married couple at yesterday’s dinner said to show us pictures which they had taken in japan, i was looking for them around the dining car and just said hello.

before we came to our cabin, we promised them to see at the lounge room around 10:00a.m..

at the lounge, we met. but there’s no electric outlet, so we went to their cabin to see pictures. we had a nice time until about 11a.m.. wife’s name is sylvia, hasband’s bill. and their companions are una rauens croft (sylvia’s mother, 85years old), hellen (sylvia’s elder sister).

una, sylvia’s mother, was a very energetic person. she showed us pictures which she had took by herself in japan where she had visited with sylvia and bill. at that time she was 83 years old.

btw, train delayed. it would arrive at cook at 2:00p.m. so, we had lunch before we reached cook.

arriving at Cook. stopover of 20 minutes. i bought three picture postcards.(3A$) and we got on the train again.

after that, i was sleeping until dinner because of being very tired. when i slept, cabin attendant woke me and told me about carry-on luggages during stopping in adelaide.

dinner started at 7:30a.m.. we took about one hour for it. when we finished, i adjusted my watch to cst. so it’s already 10:00p.m.. bill and sylvia said to leave early and go to bed.

before we came to our cabin, we took a picture with carly who was one of dining car staffs. she would change off at adelaide.

for off-train in adelaide, we packed our stuffs to two luggages and fastened a blue tag to each. 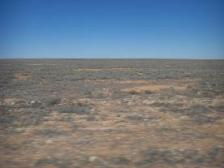