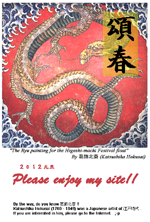 Happy New Year! It is the beginning of a new year.

This is the year of the Tatsu, according to the Oriental Zodiac.

Though ‘tatsu’ is called ‘dragon’ in English, I think they are more different than might first be surmised. Both of them have their own history, so I’m not surprised it. In the Oriental Zodiac we write it by 辰, and we also use 龍 and 竜 as a mythical animal. In Japanese the year of the dragon is called ‘Tatsu doshi(たつどし)’. You can see ‘Ryu’ on a right-side painting by Hokusai(北斎), ‘ryu’ and ‘tatsu’ mean the same mythical animal.

Last year, we had a lot of natural and artificial disasters in and out of Japan. I pray this year will be a happier year.

How have you been? I’m glad to have your comment.
Last year, after the end of September, I was very busy in real life. So I stopped translating for a while. Shortly before, I started it again.
I want to work up it until this summer. Really? Now, my answer is yes. But who knows what tomorrow will bring? A^_^;)

Actually I have been pretty busy with the studies this year. So busy that my friends said that I stop living ‘^_^

“Last year, we had a lot of natural and artificial disasters in and out of Japan. I pray this year will be a happier year” “But who knows what tomorrow will bring?”
May be the rainbow after the storm, as the saying goes 🙂

You sounds happy 🙂 Have a nice day.

> So busy that my friends said that I stop living ‘^_^

Oh, heavy! Your final year of university, right? Don’t you mind if I ask what your major?

> May be the rainbow after the storm, as the saying goes 🙂

Take it easy and have a nice day!

Actually it was like the zero year. It’s not like others universities we don’t have an important test to enter, we have a six subjets cicle before we enter (between 12 and 18 tests). If you pass all the subjects but one, you get stuck and you can’t enter to the university. I started it on 2010 and I got stuck, so I studied hard for starting my first year in 2012.
I’m studying to be an oceanographer.

Have a nice day 🙂

Probably, I understood it correctly. You studied hard and made 2012 your first year. Good job!

Oceanographer, it sounds interesting. Oceanography has many different fields. At this time, what kind of field are you interested in?

By the way, study is fun, isn’t it? Especially, about favorite field. The more I get old, the more I think so.

Exactly, the inscriptions starts on February, but I’m technically in the university 🙂 Thanks.

In this university we have only one field and it’s fisic. That’s pretty cool because I realy like fisic (although I don’t like maths).

Haha I have never said studies are fun, but they are interesting indeed. Specially oceanography that is not an explored field in our country (in spite of having a lot of coasts).

You know, I never asked you about what you do in life, but correct me if I’m wrong. You are a programmer, right?

Hi,
What is the exact meaning of ‘inscriptions’? Something like the beginning of the first year or so?
Fisic = Physical oceanography? It’s amazing. You need maths as a scientist, like Japanese need rice(ご飯) as a food, Ha-ha. Because math is like air for science, I think.

On the internet, though I never say what I do for a livelihood, I am not a programmer. But you’re not totally wrong. For some periods of my life, I was like a programmer. For others, I was like a teacher. Now, I retired. Then, sometimes translating as a hobby, (^_^).

Inscriptions are the moment and place where you present the documents (I mean who you are, yours studies) in order to start the classes.

Hahaha XD yes I do need math, and we have a lot of it in this career.